Washington State Psychological Association recognizes individuals and organizations who have contributed meaningfully to the mission of WSPA, which is to support, promote and advance the science, education and practice of psychology in the public interest.

The WSPA Board of Trustees solicits nominations from the membership, evaluates and votes on the nominations.

The awards will presented to the winners Friday, November 2nd, during the convention lunch. There is a $45 fee Saturday or Sunday only attendees and other guests. 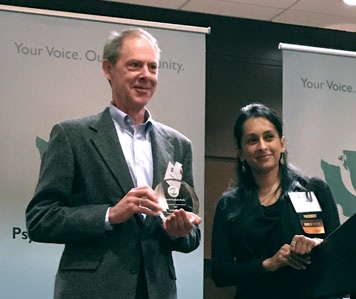 Click here to nominate your colleagues and others in one or all categories. Nominations close September 30, 2018.

Please note: a special award of recognition and appreciation will be bestowed to Dr. Lucy Homans who is retiring in December. Nominating Dr. Homans in the categories below will not be counted

The following categories are open for nomination:

Given in recognition of outstanding work in support of WSPA’s mission through some outstanding contribution.

Given in recognition of an individual member’s outstanding and tireless contributions to the Washington State Psychological Association.

Given in recognition of life-long service to WSPA and the field of psychology. This award recognizes a psychologist who has given sustained service to the association in a manner that has significantly benefited the organization and or facilitated its development.

Given in recognition of outstanding work to advance the mental health of the community and to apply psychology in the public interest. (Open to non-WSPA members)

Honors a public citizen or an organization that has contributed to the psychological health of their community. (Open to non-WSPA members)

Honors a Washington State elected official who has contributed to the psychological health of their community. (Open to non-WSPA members)

Given to the out-going President of the Board, in recognition of the service rendered.

Click here to nominate your colleagues and others in one or all categories or share this link: https://www.surveymonkey.com/r/HYHJZCX

Thank you to our sponsors!